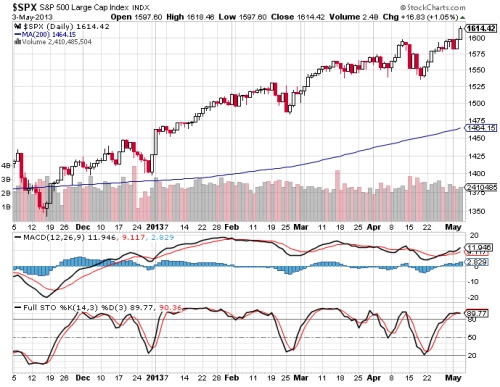 What would happen if we combined the indicators from different systems? Would they work together to make a stronger system or would they work against each other?

I recently covered a MACD Trading System and a Stochastic Trading System. Combining these two systems can give us stronger signals. This should, in theory, help to reduce false signals.

Targeting the situations where both systems agree should isolate only the very strongest signals, thus increasing the win rate.

Chart and Instrument:  Any
Period:  Any
Market Condition:  Trend

Combining these two indicators works well because they are both derivatives of price, but they are calculated differently. The Stochastic Oscillator illustrates the price with respect to the range, while the MACD shows us the convergence or divergence of two different moving averages. While both are completely based on price action, they focus on two different aspects of that action.

The primary advantage of this system is that it isolates the signals where the two different systems agree.

Combining the two separate systems will strengthen the advantages and reduce the disadvantages of each system. Both the MACD and Stochastic Oscillator are prone to giving false signals, this system provides an excellent way to focus on only the strongest signals.

This chart of the SPX provides a great example of a long signal for this system. At the end of 2012, the SPX had just recently crossed above its 200 day SMA. Then, just a few days before the new year, we see a bullish Stochastic cross followed by a bullish MACD cross. This system would have caught the entire month of January, which was very positive for the SPX.

One interesting note is that it would not have gotten back into this uptrend in March like either of the systems would have done on their own because the signals were more than a few days apart.

This could be compensated for by expanding the limit on the number of days between signals. However, expanding this limit will also open the system up to more false signals. This is the type of risk/reward situation that each trader must determine for himself.

Why Not Three Indicators? Or Four? Or Five?

If the two indicators used in this system make it stronger than the one indicator systems we looked at before, does that mean that bringing in a third indicator would make this system even stronger? If that logic holds true, why not use a dozen indicators? This is the slippery slope of system design.

When designing trading systems, we must keep in mind that overusing indicators can result in a system that doesn’t find enough signals to trade profitably. Having a system that is profitable on 98% of its trades won’t do you any good if it only gets a signal once every 200 years. Keep this in mind when experimenting with the wide variety of indicators available.

Do you have any thoughts on this trading system? Share your comments and ideas in the section below.

Simple systems stand the best chances of succeeding by not... END_OF_DOCUMENT_TOKEN_TO_BE_REPLACED

Correlation strategies appeal to forex traders because it removes the... END_OF_DOCUMENT_TOKEN_TO_BE_REPLACED

The short summary is that time based orders in MT4... END_OF_DOCUMENT_TOKEN_TO_BE_REPLACED

A major concern of newer traders is which is the... END_OF_DOCUMENT_TOKEN_TO_BE_REPLACED