Traders who use the MACD indicator often are critical of the fact that it will signal an entry after the initial move has begun and, therefore, pips are left on the table. As such, many traders wanting to enter a trade sooner dismiss it as a “lagging” indicator.

In the case of the MACD indicator, the most widely used entry signal is when the MACD line crosses over the Signal Line in the direction of the Daily trend. Since these two lines are simply two moving averages, by their very nature the crossover will not occur until the move itself is under way. And, since that crossover is the entry signal, this will put the trader in the trade after the initial move has begun. Some traders prefer this method of entry as it offers more confirmation that the move is more likely to continue in that direction.

…who are not interested in the additional confirmation and are simply looking for an early entry, they may prefer a less widely used entry signal based on the histogram bars. 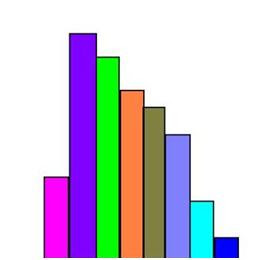 As seen on the historical 1 hour chart of the EURUSD below, as soon as price action begins to move to the downside, the green histogram bars will begin to shorten. As soon as a bar does not close above the previous bar, that means that the upside movement by price has subsided for that moment in time. An aggressive trader can use that as a signal to short the pair at that point. 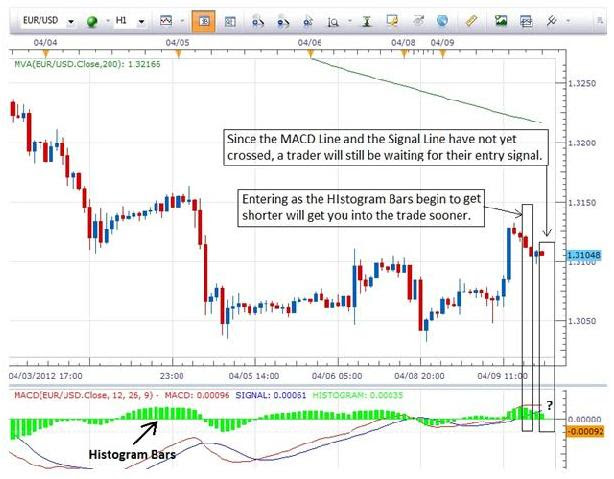 For greater confirmation of the histogram entry…

Traders who are a little less aggressive may prefer to wait until a few histogram bars – perhaps 3 to 5 – in a row close continually lower in a downtrend or continually higher in an uptrend. This will provide greater confirmation than just one histogram bar but generally will be a quicker entry than waiting for the MACD line to crossover the Signal Line. As can be seen on the chart below, although the bearish move has begun, the crossover entry signal has not yet taken place.

Note how a trader entering based on the histogram bars would have entered the trade ahead of a trader who entered based on a MACD/Signal Line crossover.

Each of the above entries based on the MACD is a valid entry. As usual, it is up to each individual trader to decide which one is right for them.

Keep in mind however that entering a trade sooner means entering with less confirmation. That is not always a good thing.

All the best and good trading…

Much research has gone into pinpointing the causes of mechanical... END_OF_DOCUMENT_TOKEN_TO_BE_REPLACED

Stochastic oscillators can be a valuable tool for mechanical forex... END_OF_DOCUMENT_TOKEN_TO_BE_REPLACED

What can we say about trend lines? Is there any... END_OF_DOCUMENT_TOKEN_TO_BE_REPLACED