Trailing stops are a risk-conscious trader’s best friend. Trailing stops let forex traders lock-in profits and reduce the overall risks of trades as they advance. They protect profits by allowing a winning trade to remain open for as long as possible, closing it once the chart changes direction. This ensures you can stay in a volatile-yet-winning trade long enough to earn profits.

By choosing the right stop parameters, your mechanical trading system can manage trailing stops helping you maximise profits in any forex market.

A penny saved by tight trailing stops is a penny earned by volatility.

For every pip that a well-designed trailing stop algorithm saves in avoiding premature stop-outs, a savvy trader can earn even more from price moves on volatility, as the trade continues favourably onward.

Let’s start with the basics.

What is a Trade Stop Order?

A stop-loss or trailing stop order is set below the current market price when taking a long position. The stop for a short position is placed above the current price. Stops can be calculated and set at either a predetermined percentage or number of pips away from the current price.

Once the marketplace has traded at the stop price or once the stop price is touched, the stop order becomes a market order. This order is set to be filled at the price specified when the order was triggered.

If the stop price is touched and the stop order changes to a market order, the trader is assured that the trade will be executed. But, the exact price obtained at execution can vary according to liquidity, order size and other factors. Usually, the tighter the order is filled, the better the trade outcome.

Where stop orders are usually static, a trailing stop is a form of stop order set to follow behind the price once a forex position is profitable.

After the initial stop-loss order has been set and then superseded by a favourable price move, the stop price for the pending exit order is adjusted to a better price as the trade continues to move in the trader’s favour.

This creates a trailing price at which the order will be executed, hence the name.

The trading system automatically adjusts the stop, changing its function from minimising losses to protecting gains as the currency price continues to move favourably away from the entry point.

The greatest benefit of a trailing stop is that it allows the trader to specify the amount of risk they are willing to take for a particular trade while estimating the potential upside.

The stop-loss parameter can be set as a percentage change or as a specific number of pips. There are two basic types of trailing stops:

What is a Dynamic Trailing Stops

Dynamic trailing stops are the type most commonly used in forex trading. A dynamic trailing-stop protocol adjusts the stop price at each 0.1 pip that the trade moves favourably.

The farther the trade moves in favour of the trader, the further the mechanical trading system moves the initial stop (the stop-loss point) in pip or 0.1 pip increments.

On the other hand, if the currency price doesn’t move favourably, then the forex trader is still protected because the stop is never moved backwards, only forward toward profit.

The trailing stop stays at the maximum favourable excursion (MFE) until that price is achieved or until the trade is closed, thus cancelling the trailing-stop order.

Consider a EURJPY trade. Let’s assume the initial entry was to sell EURJPY at 1.0325. Immediately upon confirmation that the order was filled, the trading system sets a stop-loss order with a fixed trail set at 150 pips at 1.0475.

If the EURJPY moves favourably with the trail set to 150, it means the stop order will be updated to the same as the entry amount or breakeven. And in the current example, the next trail would move the stop to 1.0175.

Another example, when using a dynamic trailing stop, the stop order will trail following the trade for every 0.1 pips of profit in the trade.

What is a Fixed-Increment Stop?

The fixed-increment trailing stop is similar to a dynamic stop, except that the orders are only trailed in fixed-pip increments.

In other words, the stop orders are moved by a fixed number of pips. For example, where a dynamic stop might trail at every 0.1 pips, the fixed-increment trailing stop waits and trails at 10 pips, 20 pips, or any other selected value.

Fixed-increment trailing stops are slower because they wait for a set number of pips to accrue before the stop-order’s price is moved. This type of stop is often used in conjunction with trend-trading strategies to lock in profits on extended price moves.

For example, assume the stop-loss is 30 pips away from the entry point and set to trail at a fixed increment of 10 pips. The stop will stay at -30 until the currency price moves a full 10 pips in the favourable direction.

Once the trade accrues +10 pips of unrealised profit, the mechanical trading system moves the fixed-increment stop from -30 to -20 pips. The stop order will stay at 20 pips underwater from the trade entry point until the currency price moves favourably another 10 pips, up to +20 pips in total.

Example of a Fixed Trailing Stop

Instead of blindly moving the trailing stop up as the price moves upward, during a trend, the trading system calibrates the stop to coincide with the price at a nearby support/resistance swing point.

Traders should keep the stop-order’s price close behind the current price without being stopped out by volatility. When used well, trailing stops can squeeze out additional profits and keep winning trades open during long-running trends.

The Trouble with Trailing Stops

Trailing stops are an important aspect of their risk management strategy for forex traders. Yet, there is a tradeoff because traders are sometimes “stopped out” prematurely and miss subsequent favourable moves.

Stop-loss orders are necessary, and trailing stops are helpful, but they need to be optimised to fit the trader’s marketplace and style. For example, traders who focus on more-volatile markets should set looser stops to reduce premature stop-outs.

As a trade moves favourably, the amount at risk lessens as the stop order moves. However, if a spike in volatility triggers the liquidation of a position under a too-tight stop order, the trader will be stopped out of a successful trade too early.

Instead, the trader must ensure that the trailing stop is based on something more than simply a dynamic or fixed-increment stop rule. The trailing stop orders which are most successful in allowing traders to retain unrealised gains are set around price support-resistance levels.

The mechanical trading system should also factor in other key price levels nearby and fractal indicators. This can help reduce or avoid the premature stop-outs that occur when the trailing stop is based solely on the amount of the favourable move.

Fractals are especially helpful in identifying and trading reversals and turning points, even the smallest-scale reversals. Forex traders can use fractals to assess swing highs and lows and other support/resistance levels to calibrate trailing stops better.

Stop Giving Back your Gains

Locking-in profits and managing risks are the two essential survival skills for forex traders. During a continuing successful forex trade, the trading system automatically moves the trailing stop each time the price moves favourably, so traders can avoid the emotional ups and downs of attempting to choose the best exit point manually.

By choosing and implementing the best trading system and trailing stops, you can “stop” giving back your gains during price retracements. 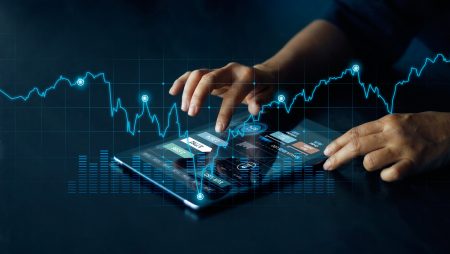 Much research has gone into pinpointing the causes of mechanical... END_OF_DOCUMENT_TOKEN_TO_BE_REPLACED

Stochastic oscillators can be a valuable tool for mechanical forex... END_OF_DOCUMENT_TOKEN_TO_BE_REPLACED

What can we say about trend lines? Is there any... END_OF_DOCUMENT_TOKEN_TO_BE_REPLACED