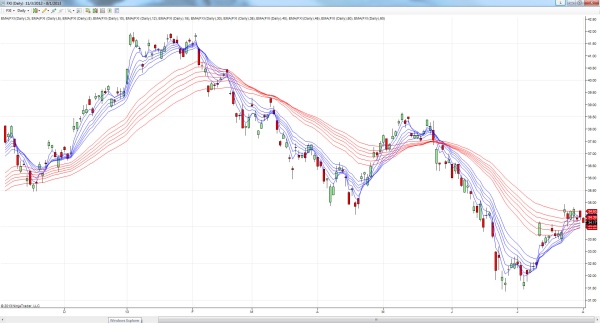 One of the most frustrating things about constructing a trading system can be the absolute freedom to use whatever indicators and values you like.

While this can initially sound positive, the virtually limitless combinations of variables can become quite overwhelming. For example, if you like the concept of the SPY 10/100 SMA Long Only System that I covered, you can implement it using any two simple moving averages you like, but which two should you use?

The Guppy Multiple Moving Average (GMMA) Indicator provides an interesting alternative to using any variable you like. Developed by Australian trader Daryl Guppy, the GMMA implements 12 different exponential moving averages (EMAs) in an effort to analyze a market’s behavior on multiple levels.

Another application of the GMMA indicator is using it to analyze the strength of a current trend, or to target additional entry points within a trend. This can be done by analyzing how the different EMAs interact with each other.

Both the long-term and short-term trends are seen as stable when each of their EMA lines are separated by a uniform distance. If the six long-term EMAs begin to flatten, the long-term trend has become vulnerable. If the short-term EMA lines begin to separate further and further from each other, the market is likely experiencing a bubble situation and traders should be cautious.

Looking at the GMMA lines on the current chart of the SPY, we can see a number of these principles in action. Notice how tight the long-term EMAs were trading with respect to each other in November and December of last year when the short-term lines crossed through them. This was the start of the new uptrend. 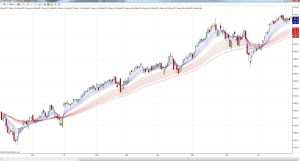 Then, those long term EMAs expanded with respect to each other as the uptrend progressed. The long term EMAs traded tighter again at the end of June, indicating weakness, but have since spread further apart.

Trading the crosses of the long-term and short-term lines would have established a long position in December that would have lasted all the way through June, locking in most of this year’s profitable trend. After a few choppy weeks, the uptrend resumed at the beginning of July and would currently be holding a long position.

The long position signaled in December would have retained most of its profits when it was sold in February. Then, a short position established at the end of February would have ended profitably at the end of April. 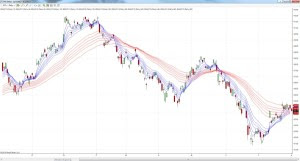 The long position triggered in May would have been sold at close to break-even, but the short position signaled in June would have turned a profit when sold in July.

One of the most frustrating things about constructing a trading... END_OF_DOCUMENT_TOKEN_TO_BE_REPLACED

Repainting indicators are one of the most common problems facing... END_OF_DOCUMENT_TOKEN_TO_BE_REPLACED

Much research has gone into pinpointing the causes of mechanical... END_OF_DOCUMENT_TOKEN_TO_BE_REPLACED