CAD/CHF recently broke the 4-hour Triangle chart pattern which was recently identified by Autochartist. Autochartist rates the quality of this Triangle at the 7-bar level – which is the result of the medium Initial Trend (6 bars), significant (7 bars) and strong Clarity (8 bars). CAD/CHF is expected to rise toward the forecast price 0,7015 – in line with the earlier uwpard reversal from the support area shown below.

As can be seen from the daily CAD/CHF chart below – the bottom of this Triangle formed near support area lying between the key support level 0,6800 (monthly low from April), lower daily Bollinger Band and the 50% Fibonacci retracement of the previous upward correction from March. The proximity of this support area adds to the probability CAD/CHF will continue to rise toward the forecast price 0.7015. 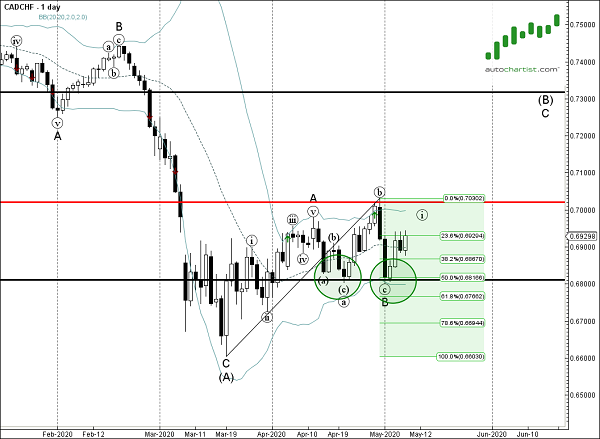 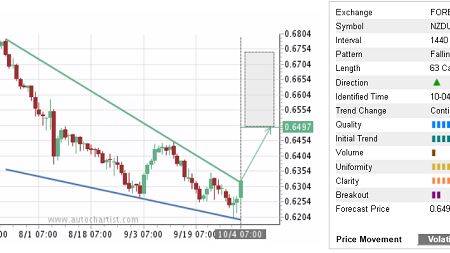 By: Dima Chernovolov USD/CHF continues to rise inside the hourly Up Channel chart pattern, which was recently identified by Autochartist.... END_OF_DOCUMENT_TOKEN_TO_BE_REPLACED

By: Dima Chernovolov GBP/NZD continues to rise inside the 15-minute Up Channel chart pattern, which was recently identified by Autochartist.... END_OF_DOCUMENT_TOKEN_TO_BE_REPLACED

By: Dima Chernovolov AUD/USD continues to fall inside the 30-minute Down Channel chart pattern, which was recently identified by Autochartist.... END_OF_DOCUMENT_TOKEN_TO_BE_REPLACED