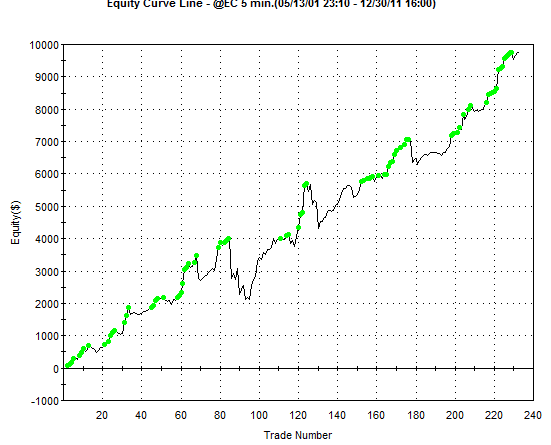 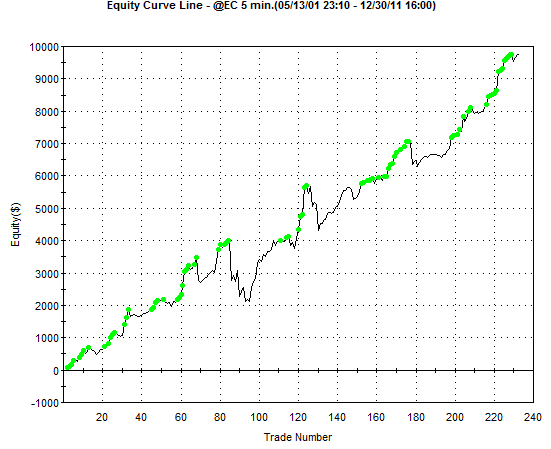 A few months ago, Jeff from System Trader Success wrote a post where he backtested a version of a Euro Scalping Strategy that Shaun had stumbled across while working on another project. Both Jeff and Shaun believed the scalping strategy had merit, but they also agreed that the strategy would need to be improved in order to be able to overcome the significant transaction costs associated with a scalping strategy that trades five minute bars.

In a follow-up post this week, Jeff tested three possible adjustments to the strategy and discussed how they would impact the overall results. What he found was that there was room for slight improvement in adjusting the price envelope and the look-back period of the moving average. This was interesting, but still didn’t make the strategy tradeable.

The big improvement came when he limited the time of day that the strategy traded. This simple adjustment took a strategy that was interesting, but not truly profitable, and made it into a strategy with an equity curve that resembles a straight line at a 45 degree angle.

While the timing change was the biggest impact, each of the three adjustments Jeff tested were interesting.

The next adjustment that Jeff tested was using the 200-day SMA to calculate the price envelopes.

For his next step in improving this strategy, Jeff plans to perform a thorough walk-forward optimization to see how the strategy will perform on out-of -sample data. 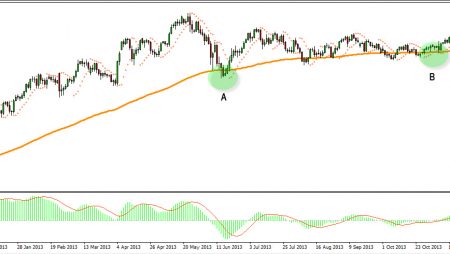