Lately, I’ve been asked fairly often why I don’t write more for the novice trader. Well, good news! If you are, indeed, a novice trader then this trading strategy is right up your alley. But even if you’re not a newbie, you might still find this tip useful.

This rather simple and straightforward strategy doesn’t involve moving averages or even any indicators. Yet it’s a strategy for long term trades that could carry on for weeks and possibly months.

What a Novice Trader Needs

Some may think that long term trades are the dominion of experts but that assumption isn’t entirely accurate. In fact, there are many elements that make long term trades a very rewarding and beneficial endeavour for novice traders.

Long term trends tend to move slower. That lets the novice trader really notice the small nuances as to how a trade evolves. That means they can learn from it, unlike the lightening quick trades that are over before you can say Benedict Cumberbatch.

The patterns are generally clearer and since everything moves slower it’s easier to digest the results. For example, a novice trader who makes $5,000 in 10 minutes tends to be easily “influenced.” He could easily be “encouraged” to take on much more risk then, only to crash later on. But making $5,000 over 10 months in low leverage, well that’s easily digestible. And that teaches you a lot about trading patiently and carefully.

I, personally, despite a decade of trading experience, overwhelmingly prefer to trade over the long term.

In order to understand the essence of this trading strategy let me just say that on a chart this pattern resembles a ski ramp. Now if you’re not familiar with skiing let me elaborate. During a ski jump, the skier will gain momentum as he slides down the ramp and jumps. And that’s pretty much all there is to it.

The chart pattern that we’ll focus on will look exactly like that. As the pair moves lower it gains momentum to jump higher, just like a ramp. If we can see that there’s a ramp we know that there will be a jump. And that is something a trader can capitalize on.

So how do we recognize this path? As the chart below illustrates, we simply take each leg of each selling wave and stretch a line from one to the next. All the lines added together should create a shape that resembles a ramp. Quite simply, the pair moves from descent to a straight line.

As you may have guessed, all the momentum from the declination later turns into a “jump” for the pair. In fact, some might consider a “jump” to be an understatement. Often, after a prolonged descent and a straight line, the ascending wave is quite long.

Now that we’ve more or less established the ramp shape to look for how would we trade this? What we want especially is to bank on the pair’s rise which will come after such a protracted decline.

In order to do that a trader must:

Now since we’ve already established the pattern, Phase A is complete.

When the pair closes above the last peak it signals that the sellers are gradually moving away. Thus they’re making room for the buyers. That is a sign that a break is coming.

Let’s move on to the most complicated part of the strategy, Phase C. The reason Phase C is the most complicated is because it’s the least intuitive. One might think that after Phase B was confirmed, the immediate action would be to enter into a long position. Well, if that was your first inclination you’d be wrong!

In order to profit from that point your stop loss needs to be very low. So low, in fact, that it might not even be worth the effort. This is on account of what happens after the break.

It’s true that the pair closes above the last peak (marked in red). As I said, that means sellers are moving away. But some sellers are still there and so a correction would come afterward. When this correction comes that would be the time to enter into a long trade.

Usually, the ideal point is an area that has been used both as a support and a resistance point. As we can notice when the point 100 was broken, the pair moved to touch the lows. That is exactly what you want. Because the chances of the pair touching its lows are now lower. Once the pair reaches point 100, you can ride a bullish wave that may reach as high as 175 before it reverses.

Of course, as I always say, nothing in life is guaranteed. Certainly there is no strategy that offers a trader a guaranteed profit without risk. But notice how this strategy doesn’t involve any complicated signals or advanced indicators. Everything that will happen will happen slowly. A great way for the novice trader to start. 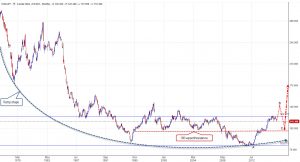 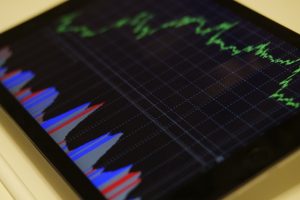