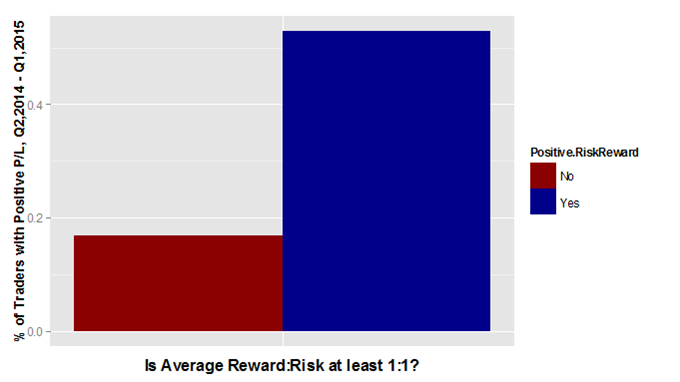 Traders that follow one simple rule are 3.118 times more likely to be profitable 12 months later than those that don’t.

The critical feature of profitable traders is their reward to risk ratio. Yes, you’ve probably read that before, but this time it’s backed up with research. FXCM studied 43 million real trades from traders around the world to produce this analysis.

Be warned: the phrase “correlation is not causation” very much applies here. I cannot promise you that based on the data that using reward to risk ratios greater than 1 will automatically give you 50-50 odds of being profitable in the long run.

Logic, however, suggests that using good reward to risk ratios is a good idea. The advice to use reward-risk ratios above one appears in every trading book ever written for a good reason.

When traders use a reward to risk ratio of 1 or more, 50% of all traders are profitable after 12 months.

I suspect that it’s not the ratio itself that’s important. Instead, a large ratio discourages the worst mistakes that traders make.

I remember a project when I worked as a broker at FXCM. The systems desk analyzed the trades of the company’s most consistent losing traders. Perhaps taking the opposite signal of the worst traders might lead to profitable trades?

Alas, we found something far more mundane: the worst traders lose because they over-trade.

Think about how trading costs apply to the reward risk ratio. If you earn $2 for every $1 that you lose, it makes scalping an impossible activity

Traders using a 2:1 ratio need to use more patience. Even though FXCM offers low spreads and commissions, a 2:1 reward risk ratio implies further distances to the profit target. Longer pip distances lower the cost of every pip of profit.

Spread as a percentage of the profit target: 14%

Spread as a percentage of the profit target: 2.8%

Your cost as a percentage of profit in these examples are 5x higher when you scalp. That’s not good!

Holding trades with bigger profit targets minimizes the impact of trading costs. Said another way, you get to keep more pips when you win by increasing the distance of your profit target from your entry price.

The advice to use reward-risk ratios above one appears in every trading book ever written for a good reason.

Lowering your trading costs logically suggests you have a higher likelihood of long term profitability.

Does the winning percentage matter

Amazingly, the percentage of winning trades doesn’t seem to matter. The high frequency trading firm Virtu is a great example of this. Virtu wins on 99.999% of trading days even though it only wins on 49% of its trades.

The FXCM data shows that the average trader wins more than 50% of the time. EURUSD trades won 61% of the time, while some pairs were closer to 50%. The percentage of winning trades on all currency pairs is greater than 50%.

Despite winning more than 50% of the time, trades with a poor reward risk ratio only had a 17% chance of earning a profit 12 months later.

… you get to keep more pips when you win by increasing the distance of your profit target from your entry price.

If you’re currently struggling with your profitability, you’ve probably thought to yourself, “I need to win on more of my trades.” It’s like a business owner saying, “I need more customers.”

Smart business owners know that finding more customers is time consuming and expensive. It’s often much easier to sell more stuff to the customers that you already have.

It works the same way in trading. Instead of worrying about winning more often, you should focus your efforts on squeezing a few extra pips out of your winning trades.

If there’s anything that you should learn from this research, it’s this: the fastest way to improve is to earn more pips on your winning trades. You do not need more winning trades to do better.

If you daytrade EURUSD where the daily range has recently been around 80 pips, then that 80 pip range is the hard ceiling of what you could possibly make in a day. You know from experience that getting the bottom tick or the top tick of the day almost never happens. If you’re lucky, you may enter within 10-20 ticks from the bottom.

Upon entry, you also need to give the trade breathing room. That stop loss probably needs to be something like 25 pips if it’s a tight stop or 40 pips in order to have plenty of breathing room.

The best exits in a ranging market occur in the middle. You don’t know if the market will push back to its ceiling. It has just as much chance as going back to support and it does up to resistance.

The midpoint of an 80 pip range is 40 pips, but you’re likely entering 10-20 pips from the true bottom. That only gives you a potential range of profit targets from 20-30 pips.

Consider what a range trading strategy is. The market is stuck. It’s having a hard time going anywhere. You should only range trade if you have a well researched strategy with a long term edge. Otherwise, the typical trader is 83% likely to walk away with losses after a year.

Trend trading strategies should last for weeks or months at a time. Looking again at EURUSD on a multi-month time frame, the current long term range is from 1.05 up to 1.16. That’s a range of 900 pips, but it’s not like the market wobbles up and down through that range. Instead, it gets stuck near 108, then briefly pushes down. It comes back to 1.08, then pushes up to 1.12. It might push up again to 1.15, then trade back down to 1.08. It’s hard to guess whether the next move will be up or down.

The natural risk reward ratio for these types of trends is astronomically high. For a few hundred pips of risk, you can make 10 or more pips for every one risked.

As long as you’re not aggressively trading, trending strategies are far more difficult to mess up. If you can click a button, enter a stop loss and then do nothing for months at a time, then you’re qualified to consider trend trading.

The practical application is of course more difficult than that description, but that’s the idea in a nutshell. If you’re a newbie forex trader and wondering where to start, long term trends are the place where you’re less likely to get hurt.
The problem for newbies, though, is that they’re looking for excitement. It’s not terribly exciting to place on trade and then do nothing for months. It’s one of the paradoxes of the market that less work can often lead to better results. 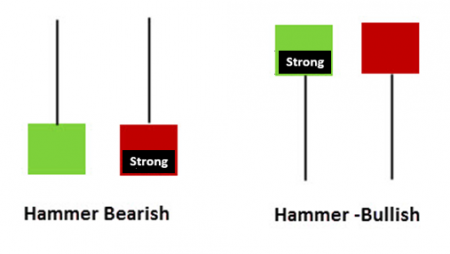